The Parker Youth & Sports Foundation is dedicated to the support and preservation of parks, sports facilities and athletic programs in the greater Yakima area.

The Parker Youth & Sports Foundation is again responding to the directives of our health officials by postponing our legends event until February 26,2021. Details will be in our next newsletter.

In 2019 the Foundation hosted its 14th Annual Sports Legends Reunion. It was held at the Howard Johnson Plaza of Yakima on Friday, June 7th.  Phil English, nationally acclaimed cross- country and track coach was our honored guest. He represented his native country, Ireland in international competitions. He later was part of top-four NCAA cross country and track teams for the   Washington State University.

The banquet evening featured live and silent auctions. We were honored to have Todd Stottlemyre and his mother, Jean, along with Sherrie Parker as well as the 1976 Championship YVC Baseball Team in attendance. Awards were presented and a special grant was presented to Mabton Mayor Laura Vazquez for Mabton Parks in memory of Mel Stottlrmyre.

Phil Hinrichs served as the High Hopes Tournament Honorary Chair. He was the winning pitcher of the state championship game for the 1976 YVC baseball team. The team hold the record for the highest win percentage in YVC history. Phil played for YVC hall of fame coaches Bill Faller and Bobo Brayton.
Board member Don Erickson along with help from Coach Faller rounded up 22 teams for the event this year.

Proceeds generated be the events provide the funding source for our grant program. We support grant requests for matching funds up to $1000.00, pro-active giving requests of $300.00 and grant requests for youth athletic programs in the Yakima Valley. Since 2004 we have awarded over $550,000. 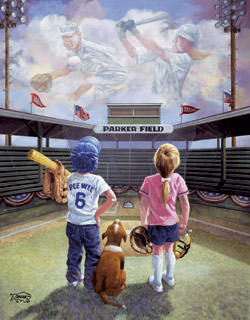 "High Hopes" is an original creation by award-winning Yakima artist Don Crook. Commissioned by the Foundation to create a scene representing our mission, Don used old photographs of the original Parker Field and his own memories in his depiction of the grandstands, press box and lights while incorporating youth and their dreams to further convey the purpose of the Foundation. An alumnus of Yakima High School and Yakima Junior College, he played football and baseball in the original Parker Field.